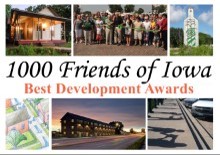 1. Pursue the impossible “Who would have ever imagined that our town could do this?” is a common question voiced by West Union community members and former residents. With a population of 2,500, the northeastern Iowa town’s ambitious streetscape initiative is one of the most innovative, sustainable community demonstration projects in the country. In Des Moines, the Madison Flats apartment building is located on a former landfill site with major drainage issues. When the Neighborhood Development Corporation was originally looking at the location people “politely said we were crazy,” said executive director Glenn Lyons. The nonprofit’s priorities and resources like Iowa’s Brownfield/Grayfield Tax Credit Program enabled NDC to persevere. Noting that they dug up a fully buried dump truck, Lyons said, “We’re able to work in areas the private sector deems too risky, and provide a catalyst for getting them interested.” Dubuque’s Green Alley Program is retrofitting 240 alleys with permeable pavement to reduce storm water runoff by up to 80 percent. “We cannot ignore issues simply because they might appear to be too big,” said Deron Moehring of the City of Dubuque. Instead, the program applies a city administration mantra “plan your work and work your plan” to address matters head on, quantify the issue, and be broad-reaching when seeking funding options.

2. Invest in existing neighborhoods After a dilapidated building collapsed, the City of Slater was left with a clean up bill exceeding $120,000 and an empty lot to own. It opted for a proactive approach with a similar property. The city purchased 421 Main Street in order to access renovation resources such as the Iowa Department of Natural Resources’ Brownfield Redevelopment Program and Derelict Building Program. Financial support for addressing asbestos, replacing the roof and completing structural renovations enabled the city to do basic restorations then resell the property to a couple who now has a home and business in the historic building. City of Slater’s Jennifer Davies said, “For someone starting a business, salvaging a building or constructing a new one is a serious expense they cannot take on. It is easier for us to sell a useable shell than an empty lot.”

3. Do the unexpected When David Barzen of Sterling Investments drove by a dilapidated house on Urbandale Avenue in Des Moines he didn’t see what everyone else saw. Instead of tearing it down, Barzen bought it to turn into a rental property. Rather than cutting corners or making quick fixes, he chose to do custom restoration work. Barzen said, “I have found the nicer qualities I put into a property, the nicer it’s taken care of by tenants.” He sacrifices short-term investment gain for taking satisfaction in a job well-done.

4. Get personal Woodbine participated in a study that called for “kitchen table conversations.” Woodbine Main Street’s Deb Specker said the result of gathering a mix of ages and backgrounds in a comfortable setting was “a real list of priorities drawn up by real citizens, and a tremendous groundswell of support followed.” In Stanton, graduates of the local school are included in communications about the town’s new Viking Center and how it serves the community. Mickey Anderson of Stanton Friends gratefully acknowledged that “funding from graduates coast to coast helped make the project become a reality.”

5. Be shovel ready Dubuque learned readiness gives projects a helpful edge. “Many new programs are looking for ‘shovel ready’ projects because they want to effect change in short order,” said Deron Moehring, a civil engineer for the city’s Green Alley Program. “Dubuque has found that if you are ready, the funding programs will come.” The Stanton community experienced similar findings with its Viking Center project. Despite the financial crises in 2008, Mickey Anderson said, “We kept going because we knew we’d be one of the few ready when the economy bounced back.” Perseverance and preparation empowered the town of less than 700 residents build a multi-use community center that now boasts 200 members and 500 end users.

6. Respect the future Foreseeing a time when homes are held accountable for the resources they use, Chaden Halfhill of Indigo Dawn and Silent Rivers Design + Build renovated a home in Des Moines’ historic Sherman Hill neighborhood to be a replicable model. He found ways for historical charm, modern conveniences and sustainable building aspects to coexist. “This is a small house that lives large,” Halfhill said. “We traded square footage for quality, and demonstrated that comfort does not have to be compromised.”

7. Communicate, communicate communicate. Ambitious plans often involve private-public partnerships. Deb Specker of Woodbine said, “Partnerships are most effective if everyone has all the information.” Furthermore, she suggests taking extra effort to provide background information and regular updates to new collaborators. “It’s rather time-consuming work, but absolutely necessary,” she said.

The Best Development Awards are selected from a pool of applications each year and judged by an independent group of jurors.  The 2014 jurors included Ryan Peterson of Impact7G, Iowa State University graduate student Kristen Greteman, and City of Ankeny Community Development Director John Peterson.  Plaques commemorating each 2014 Best Development Awards recipient will be presented to the winners individually.

1000 Friends of Iowa, founded in 1998, is a statewide nonprofit organization focused on land use education.  Its mission is to unite Iowans in efforts to protect farmland and natural areas, revitalize neighborhoods, towns and cities, and improve quality of life for future generations.

Additional details about each winning project and 1000 Friends of Iowa’s smart growth priorities can be found at www.1000FriendsofIowa.org.