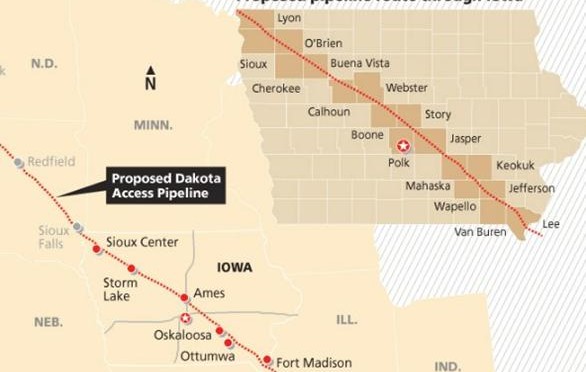 The Bakken Pipeline Resistance Coalition, which 1000 Friends of Iowa is a member, is looking for people to “adopt” a section of the pipeline route to watch DAPL’s construction and be the eyes and ears for justice.

Because it is crucial to protect our waters and support landowners who are trying to protect their land, we want to create a team of people along the pipeline route who can monitor their section for violations of the law.

For those who are willing to help monitor a section of the pipeline, you will:

We want to create a team of people across Iowa and South Dakota that can help defend our land and water.

If you’re willing to be a pipeline monitor, follow the link below and fill in your contact information. We’ll send you the call-in information for the training call and handbook.

Currently the Army Corps of Engineers is only evaluating the project in a piecemeal fashion, rather than looking at the entire project.

This hazardous and unjust pipeline cannot be evaluated piece by piece. It is impossible for the Army Corps to grasp the true consequence and nature of this toxic project if they look at it through a narrowed lens.

Stay tuned for next steps.

Join us Wednesday, December 16 for  the Iowa DNR’s public hearing on the proposed Bakken Pipeline.

Dakota Access, the company seeking approval to build the Bakken Pipeline, must obtain a permit from Iowa Department of Natural Resources to build its pipeline across Iowa’s public lands.

As part of its consideration of this permit, the DNR is holding a public hearing this Wednesday, Dec. 16, in Des Moines, in the auditorium of the Wallace State Office Building, 502 E. Ninth St., in Des Moines, from 5:00 to 7:00 p.m.

That means we need a lot of you there to make sure the Iowa DNR hears us load and clear – “NO BAKKEN PIPELINE IN IOWA!”

The following basic talking points are here for your reference – but do share you story and thoughts regarding the proposed Bakken Pipeline in any way you see fit!

Eminent Domain and the Pipeline

The effects on agriculture land have not been thoroughly investigated:

The pipeline provides little economic benefit to Iowa and to Iowans:

This pipeline will exacerbate climate change:

The IUB needs to require Dakota Access to perform an environmental impact study:

More About the Pipeline

A Texas company is proposing a 343-mile underground pipeline to cut diagonally across 17 Iowa counties on its path from North Dakota to Illinois. Dallas-based Energy Transfer Partners has proposed the pipeline will span four states for a total length of 1,134 miles carrying 570,000 barrels of crude oil each day from the Bakken oil fields in North Dakota to Patoka, IL where the crude will be redistributed across the U.S.

Energy Transfer Partners has asked the Iowa Utilities Board (IUB) for permission to build the underground pipeline in Iowa. Board approval would give the company access to eminent domain powers which would force landowners to sell their property if a sale agreement is not reached. A group opposing the project asked Governor Branstad to block the proposal; a request the Governor declined.

Economic development projects should be analyzed on what we have to lose in the long run as well as short-term, one time gains. One has to ask, who stands to benefit most from this pipeline? Not Iowans.

The Bakken Pipeline Resistance Coalition’s site for a wealth of resources on the issue. The coalition has also set up Facebook and Twitter accounts to keep the public informed of the very latest.