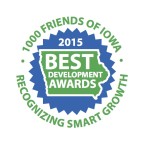 The 2015 Best Development Awards were selected from a pool of applicants each year and judged by an independent group of jurors: Ryan Peterson, president of Impact7G; Liz Christiansen, director of the University of Iowa Office of Sustainability; Jeff Geerts, special projects manager with the Community Development Division of the Iowa Economic Development Authority; and Maureen Collins-Williams, an Iowa public sector professional who trains, speaks and consults with 21st century entrepreneurs and innovators.

Photos from the Awards Ceremony

July/August 2015 issue of the Iowan Magazine

A common theme heard from recipients was the community effort that went into realizing projects, and how much everyone appreciated that 1000 Friends of Iowa recognized not only the larger projects seen in some of the bigger cities, but small town projects as well. Our goal for the Best Development Awards is to inspire people in any sized city to make sustainable choices to improve quality of life in their community and around the state. 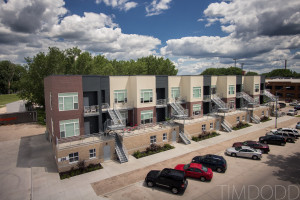 As the first phase of River Place, a local redevelopment project on the riverfront in downtown Cedar Falls, 300 State Street is a three-story, 21-unit residential building. The placemaking and walkability qualities of this new residential project stood out as did several notable aspects of this project:

To learn more about 300 State Street and the River Place Development, visit http://www.riverplace-cedarfalls.com/ 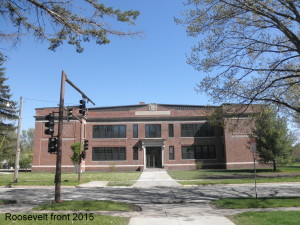 Built in 1923, The Roosevelt has played a major role in the social, cultural, and educational life of central Ames and is a good example of Progressive-era Neo-classical architecture. Listed on the National Register in 2010, many people in the community felt it was too important to be demolished. After much community input, the school district began to allow tours of The Roosevelt by interested parties. RES Development, Inc. led by Dean Jensen, purchased the 37,000 square foot building in March of 2013.

Several smart growth aspects of this renovated residential project include:

To learn more about this school building renovation, visit www.rooseveltreimagined.weebly.com 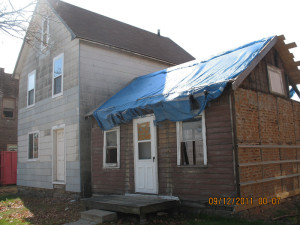 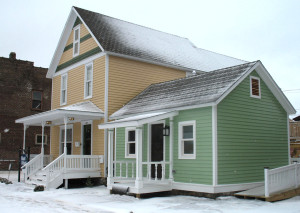 The Albert and Anna Herda House is a small 263-square-foot structure built in 1875 that was severely damaged in the devastating 2008 flood. Jon Jelinek and his family have brought this little house back to life as a bed and breakfast in the heart of the vibrant Czech Village/New Bohemia Main Street District in Cedar Rapids. After the 2008 flood, several historic houses in the District were demolished, leaving just a handful of homes. As the smallest and oldest of these houses, the Herda House is distinctly different than any of the other historic homes on 3rd Street. One of the original project goals was to show how the standards for historic preservation go hand-in-hand with sustainable building practices.

1000 Friends of Iowa believes this renovation project deserves recognition for meeting the Iowa Green Street criteria and for the passion and commitment to saving this little house with a long history.

To find out how you can stay at the Herda House, visit www.airbnb.com/rooms/6227297 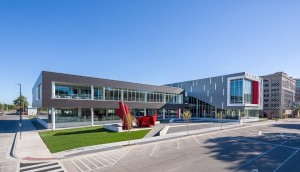 When the 2008 flood struck Cedar Rapids, the city’s downtown library was destroyed when eight feet of water damaged the building and materials beyond repair. In response to the unprecedented natural disaster, the city rallied to build a new central library. OPN Architects’ design of the new library was guided by three primary ideas: 1) Establish the library as the dynamic center of the city’s urban core; 2) Embrace the transformational shifts in 21st Century technology; and 3) Minimize the building’s environmental impact and long-term operational costs. The library has become a distinct anchor for gathering, learning, and entertainment for downtown Cedar Rapids.

Smart growth aspects that stood out about this project include: 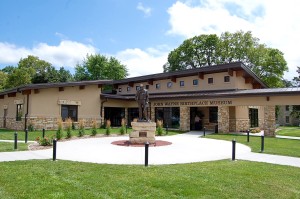 Fifteen years in the making, this former brownfield site complicated by multiple former gas stations and contaminates was transformed into a beautiful landmark in the city of Winterset. Angelo Architectural Associates have worked with the museum’s executive director, Brian Downes, for the last 6 years to realize this project. One block from the Winterset Town Square, the museum took several design cues from the city’s century-old courthouse.

1000 Friends of Iowa believes this new building project deserves recognition for creating a destination in Winterset, who as a community is very proud of its John Wayne heritage. 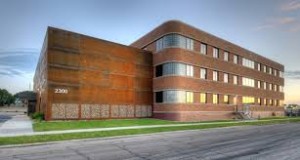 Founded in Sioux City in 1933, Thompson Electric Company had grown into 3 companies, 5 separate buildings with a combined 22,000 square feet and 150 employees as well as offices in Omaha and Sioux Falls. After considering sites in the neighboring states of Nebraska and South Dakota to consolidate operations in a single, large facility, the company, led by CEO Skip Perley, maintained their Sioux City roots with the purchase of the long-vacant 1937 Standard Oil Company building. M+ Architects was brought on to transform the former 66,000-square-foot warehouse into TEC’s corporate offices, production, and storage facility.

Notable aspects of this commercial renovation include:

To learn more about the TEC Corp., visit http://tec-corp.com/home.html 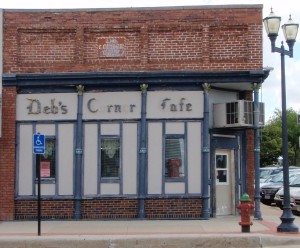 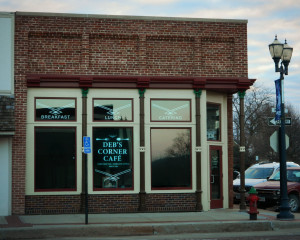 Named to Preservation Iowa’s Ten Most Endangered Properties list in 2010, this historically significant building was literally in danger of falling into the street. Deb’s Corner Café occupies one the most recognizable buildings in Manning’s Main Street District and has been considered a landmark since its construction in 1891. The cafe is also the only place downtown to get breakfast and is home to numerous daily coffee clutches.

1000 Friends of Iowa believes this renovation project, with its community involvement and passion, deserves recognition for the following aspects:

To learn more about the revitalization happening in the Manning Main Street District, visit http://www.manningia.com/main-street-manning.html 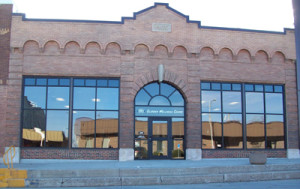 The historic building at the heart of the Glidden Wellness Center used to be home to the local newspaper, which was vacant and dilapidated. Spurred by a local group of high school students who went to City Council and advocated for a wellness center in Glidden instead of having to drive to nearby Carroll, the City of Glidden moved forward with the redevelopment project. 1000 Friends of Iowa recognizes not only the wellness center’s integration of smart development practices but also how health and wellness are integral to living in a thriving, sustainable community.

Noteworthy aspects of this civic project include:

To learn more about the Glidden Wellness Center, visit http://cityofglidden.org/www/index.php?option=com_content&view=article&id=132&Itemid=85 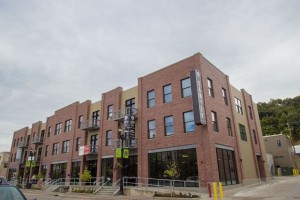 Once a brownfield site (complicated by the presence or potential presence of a hazardous substance, pollutant, or contaminant) located in the historic 100 Block in Council Bluffs, this infill project by J Development Co. is now a three-story structure that includes 9,000 square feet of main floor commercial/office space with two stories of housing above, a parking deck including 72 stalls, and 10 row houses, all on 1 acre of land.

Notable aspects of this mixed-use project include:

To see more about The Sawyer Building, visit http://thesawyerbuilding.com

After the 2008 flood, residents of Elkader began to brainstorm ideas to reconnect people to the Turkey River. Before the flood, the river was difficult to access and wasn’t integrated into the daily lives of residents. Unfortunately, the devastation of the flood left a lasting impression of what the river represented to Elkader. After a group of volunteers approached city council and received a grant for a hydrology study, plans for an improved river access and recreation project was underway. Completed in 2015, the Turkey River in Elkader now has a new identity in the community.

The leadership qualities that stood out to transform this daunting natural resource into a community cornerstone include: 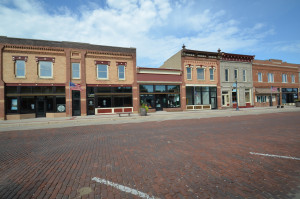 After years of planning, in 2012 the City of Manning was awarded a Community Development Block Grant as part of the Downtown Revitalization Fund. Public-private partnerships and countless volunteer hours drove the comprehensive, 17-facade project. The buildings were constructed between 1885 and 1939, and together span 475 linear feet of Manning’s Main Street. An outdated Bavarian design theme enacted in the 1980s had hidden the buildings’ historic structures and storefronts that were brought back to life during the meticulous restoration process.

1000 Friends of Iowa believes this extensive and infectious renovation project deserves recognition for the community’s vision and commitment to restoring downtown Manning, which have inspired continued efforts to restore and revitalize additional buildings in Manning and also serve as an example to other Iowa communities. 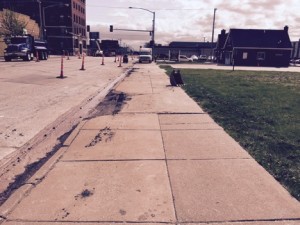 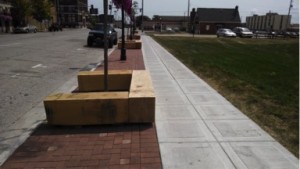 The before and after pictures illustrate how creative design and problem-solving took an aging city street and transformed it into a sustainable, pedestrian- and tree-friendly streetscape with storm water management driving the project. Due to the project’s impact, the City of Davenport expects to reduce the amount of runoff entering the Mississippi River by 25,000 gallons during a typical rainfall event.

Notable aspects of this streetscape project include:

For more information about storm water management in the City of Davenport, visit http://www.cityofdavenportiowa.com/department/division.php?structureid=434 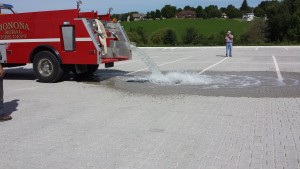 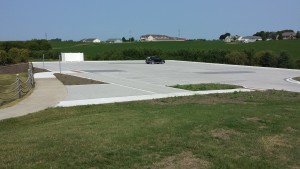 This YouTube video tells an irrefutable story about the power of permeable pavers. Formerly a crushed stone parking lot with a steep slope and severe erosion that flowed into Silver Creek, the site was transformed by the City of Monona. By taking the steps and making the investment in permeable pavers to help improve the negative impact on the nearby Silver Creek, which was listed as one of the 50 worst sampling sites in the Turkey River Watershed, Monona is a positive example to many communities looking to improve water quality.

Several aspects of the storm water management and runoff project include:

For more information about water quality in Monona, visit www.mononaiowa.com/water.htm